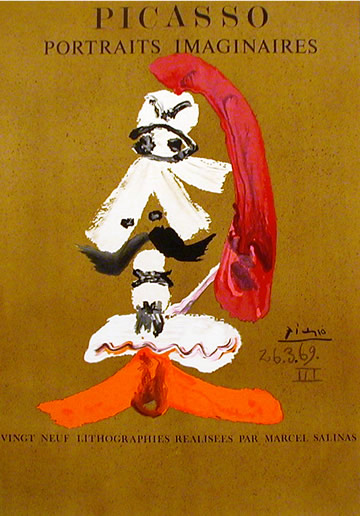 This lithograph, Picasso Portraits Imaginaires, is based on a unique painting on cardboard that Picasso created March 26, 1969.  The artist painted a number of similar portraits at his home in Mougins, France that spring. Just four years before his death, Picasso received a delivery of art supplies at his home and studio at Mougins on the French Riviera.  The shipment was protected by large sheets of corrugated cardboard.  Even at the age of 87, Picasso’s imagination seized on the opportunity of these irresistible blank surfaces. The result was twenty-nine Imaginary Portraits, a gallery of pictorial inventions that have the vigor and daring of an artist just beginning his career.


The renowned lithographer and chromist Marcel Salinas collaborated with Picasso on the "Imaginary Portraits" series from 1969 to 1972, recreating the lithographs  on hand-drawn lithographic plates after Picasso's death in 1973.

Born in 1913 in Alexandria, Egypt, Salinas abandoned law to become a struggling young painter.  Lithographs saved his career and his life.  In 1955, he took a job at a Parisian print shop, and soon became a master painter while his renown as a printer and lithographer grew.  He worked with major publishers and artists, such as Rene Magritte and Max Ernst, but his landmark collaboration was with Picasso.

Picasso, in addition to his genius as a painter, created a new standard for excellence in lithography, and part of the credit is due to his partnership with Salinas.

Picasso heard of Salinas' work when he was looking for new interpretations, rather than just copies, of his "Imaginary Portraits" painting series.  He asked Salinas for two prototypes, and was as impressed with Salinas' work as Salinas was with "Guernica."

Between 1969 and 1972, Picasso and Salinas produced new versions of the "Imaginary Portraits" series, 29 works in all.  Although Picasso was a solo genius, the collaboration between Picasso and  Salinas was one of the most successful partnerships in Picasso's lifetime.

In late 2006 the entire collection of 29 Imaginary Portraits is scheduled to be exhibited at the Arkansas Arts Center, to be loaned by the Jacksonville Museum of Modern Art.