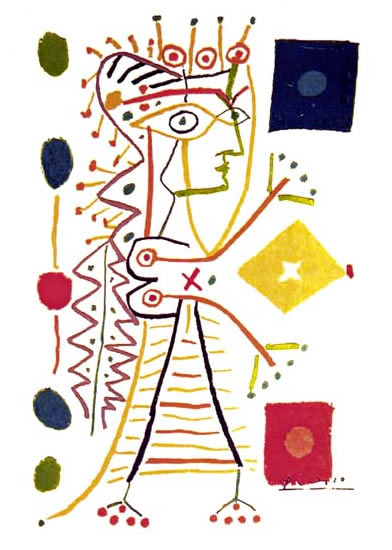 This is a copy of the original lithograph which was in a larger size and printed in a total edition of 100 examples. Due to the popularity of the image, it was reprinted in smaller dimensions and a larger edition size (possibly as high as 500).

It may also have been printed on black paper (instead of just this filament Japon paper) but we do not have certain documentation on it.  The original lithograph was sold for $17,500.

In 1958 when the original lithograph was created Picasso bought a 14th century château near though he continued to live near (in ).

His 75th anniversary exhibition opened at the Philadelphia Museum of Art while 150 of his ceramics were displayed in .  Still a collector of art, Picasso purchased six works of art by Degas in 1958.

Picasso began to send payments to assist Fernand Olivier (his love from 1904-1912) until she died in 1966.  He was mad at her for earlier having published selections from her memoirs.  Her book, Loving Picasso, was not published until 1988.